was established in 1935 when there were only 11 individual elephants remaining from the vast herds that roamed the in . That small herd of 11 has now grown to over 500 and share the park with Lions, Leopards, and Black Rhino making Addo the only National Park that you can see all of the Big Five in a malaria free zone. It has also grown in size to where it is now ’s third largest National Park encompassing some off-shore islands and by so doing has added the Great White Shark (protected in South African waters) and the Southern Right Whale to the Big Five making it now the Big Seven. 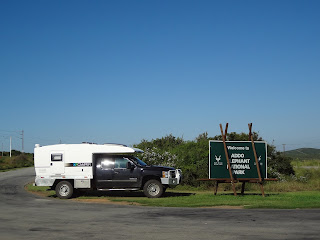 Bush Baby at the Gate to Addo

Although during our 4 day stay at Addo we only saw Elephant and the encounters we had with them were numerous and exciting. 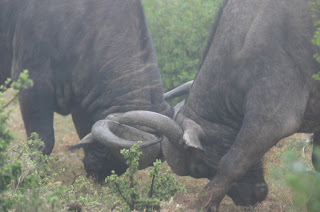 Always trying to get the upper hand 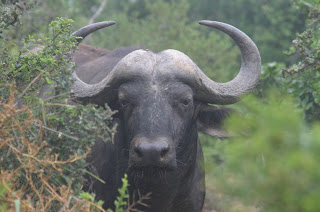 Surprise out of the scrub bush

On our early morning game drives, the camp gates open at 6 am and we were one of the first in line, we were lucky enough to see Kudu, Meerkats, Yellow Mongoose and tons of birds. Although about 80% of the roads were dirt they were good and easily driven on by any vehicle. 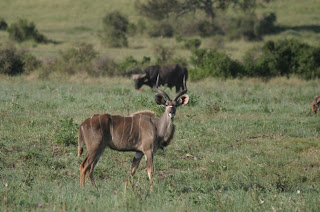 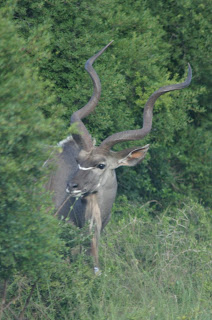 Large Kudu right beside the road 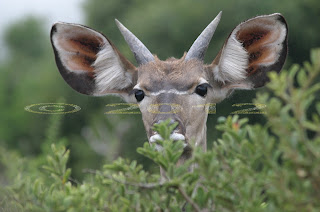 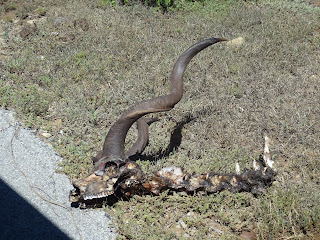 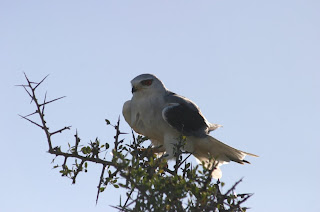 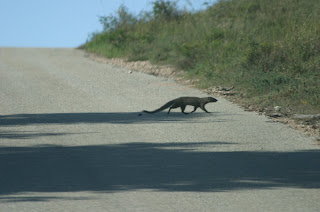 The rest camp was superb for camping, with each site separated from the next with a row of high bush and trees. The communal bathrooms or ablutions as they called in were large, clean and well maintained. Each site had its own electric plug and water wasn’t too far away. The restaurant and store served the campers and day trippers with a variety of food and liquid refreshment. Books, maps and souvenirs were readily available.

The Elephants come down to the water holes in droves and although we never counted them we think we easily saw 80 to 100 elephants at one time. The teenagers play in the deep-end which is deep enough to almost cover them completely and the elders and very young hang out at the edge splashing water over their hot bodies with their trunks. As new groups arrive they either wait their turn especially if they have very young or they greet the others with low growls and touches of their trunks and get their fill of water too. Amazing and exciting hours spent at the water holes. 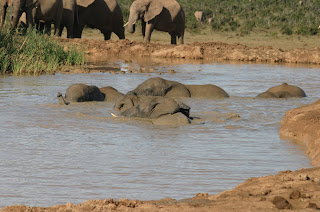 Teenagers in the deep end. 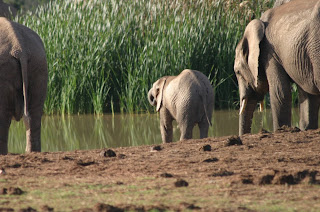 Little ones with their mother at the edge 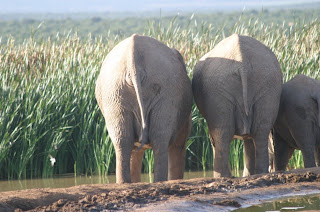 All in line for a drink 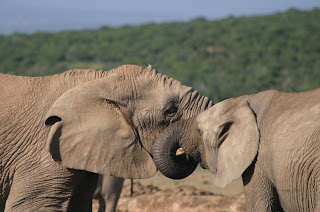 On one of our early mornings at the water hole Annie spotted a large gang of Meerkats hunting on the edge of the area where the Elephants came out of the scrub and we spent a good part of the morning watching Meerkats being Meerkats. 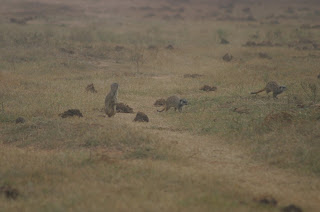 Meerkat gang on the hunt. 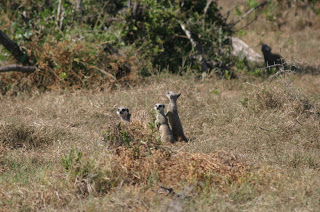 Forever vigilant.
Addo was our first and it certainly exceeded our expectations, being so close to the big city of Port Elizabeth and the famous Garden Route 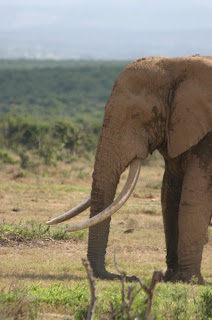 Photos by Annie and text by Frank.

.
Posted by NextMillionMiles at 7:04 AM No comments:


If your computer stops working, the support from tech support is everything.

If your water pipes burst support from your plumber is everything.

But, nothing compares to breaking something 10,000 miles from the nearest repair shop or retail agent. That’s when the support of your manufacture is critical.

We broke our back window beyond repair and sent an urgent email to Marc at XP asking for support. The very next day we heard back from him and he had found a replacement window, worked out the shipping and customs arrangements and here we are 2 weeks later 10,000 miles away with the replacement window installed in . When you are 10,000 miles away a caring reliable manufacture is everything.

Please realize that we have no sponsors and pay our own way so that we may say everything we may need to say when it necessary!

Posted by NextMillionMiles at 10:07 PM 3 comments: