The border crossing was a snap; the usual go to immigration first then the police next then customs next and then repeat on the other side and pay the $30.00 carbon tax and you are on your way. It is hard to believe that up to maybe 20 years ago there wasn’t a border between and . It was like crossing between provinces and you only knew that you had crossed into , as was known then, if you were alert enough to see the sign.

Once across the border we headed to the petrol station as we crossed with as little petrol as was prudent because petrol is about .50 cents a gallon cheaper in . Unfortunately that is the only thing that is cheaper! Camping is 50% more expensive, food is more expensive and you pay a daily fee at game parks for each person and an additional fee for your camper. But, is huge and you will drive many, many miles so cheaper petrol helps balance the budget.

Our first destination was the which claims to be the 2nd largest canyon in the world after the . Well, that claim and, as it turns out, a couple of other Namibian claims to fame, are not quite true as the Blue Nile Canyon (or is it the White Nile) in Ethiopia is the 2nd largest canyon. You reach the Fish River Canyon by taking a dirt road off the main Windhoek highway or the B1 and drive the hundred kilometers down this deserted, dusty road, and I mean deserted as we didn’t see another car in either direction for the whole ride and then suddenly out of the blue is this ‘Road House’ beside the road. Of course you must turn in and see if they have ice cream and we are amazed by the place. The owner has collected vintage cars and planted them all around his garden. He has a cactus growing out of the engine of a really old Ford and has vintage American cars parked in front of the restaurant and inside the restaurant there are all sorts of vintage auto memorabilia from petrol pumps to vintage advertisements. Man what fun and it doesn’t end there, in the men’s room there are old risqué movie posters and on one wall is a larger than life mural of Pandora! 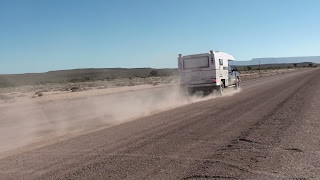 We had delicious Apple Strudel with ice cream for lunch and decided this was the place to make camp. The campground was shaded and spotless and there was a very clean swimming pool. What an introduction to !

That afternoon we drove the 30 or so kilometers to the park and after paying our entrance fee we drove the last 15 kilometers on one of the worst dirt roads in . The road is so bad that South African car rental companies explicitly ban you from taking their rental cars to the . Once there the view, although not spectacular, was nice!  We spent a very pleasant hour or so chatting with the 3 or 4 other intrepid visitors exchanging stories. The best story was the one told by the young German couple on their honeymoon (Germans seem to like to take their honeymoons in in a rental truck with a rooftop tent, as this must have been the third or fourth ones we had met). They took a park arranged night game drive in the Kgalagadi and when the guide heard some lions she stopped the game viewing truck, which was one of these open top and open sided trucks that are so popular in game parks. They listened to the lions for a minute or two and when the lions got quite close the guide decided to move off, but the truck wouldn’t start so she got on her radio to call for help, but the radio didn’t work either and they were out of cell phone range. The long and the short of it was they were stuck in an open air truck with lions roaming about in the pitch dark for over 4 hours!


From the we drove to Aus to see the remains of the South African concentration camp where they kept the captured German soldiers during WWI. Not very interesting, just a plaque in the middle of the desert and some very rusty tin cans. Further east of Aus there is a wild horse sanctuary where a couple of herds of wild horses are protected and roam free. The story of how they got there isn’t quite clear but the amazing thing is that they survive in very harsh conditions and seem to be able to go without water for days on end.

Our plan was to drive to the town of and spend the night. Ludritz is an old German settlement right on the with some famous German style architecture. About 30 kilometers from Ludritz we ran into our first sand-storm. The wind was blowing very hard and the sand was making it hard to see. Once in Ludritz it was still windy and miserable so after a quick drive around town and getting some supplies and petrol we high-tailed it back to Aus and a great campground just 15 kilometers east of town.


The next day we set off for Keetmanshoop which really has a Wild West feel to it. It is named after a German gentleman who supported the mission in the   small town by sending them supplies and helped finance the mission, so they named the town after him which translates into Keetman's Hope as he gave the mission hope. Nice story I thought.

We wanted to spend the night at the but the campground was hot and dusty, with little shade. We decided to get our money back and move on to a farm campsite 30 or so kilometers down the dirt road which was much more pleasant. The wasn’t that great either and I think the one just outside Nieuwoudtville in the Northern is not only bigger with many more trees but it is also free!


On to for much needed supplies and an oil change and service for the Chevy. Each time we visited a dealership the excitement that the truck generated was amazing. The service guys call the salesmen over and then the manager’s show up. There is a general buzz going on with questions being thrown at you from all sides. When we were deciding to bring the Chevy to we got in touch with Chevy and questioned them about the Chevy Lumina in , (the Lumina also has the 6 Liter gasoline engine). They referred us to Chevy South who assured us that the engines in the 3500 HD and the Lumina were the same, albeit tuned a little differently. They also assured us that we would be able to get parts for the engine in . They were right, as oil filters and such are readily available. We then offered to show the truck to select dealers in so they could see what an American Chevy looked like and we would do it not wanting anything in return. We never heard back from Chevy South and I think they missed out after seeing the reaction of the staff at the couple of dealerships we have visited for a service. They show a tremendous pride in the Chevy product….

Finally we are on our way to Etosha which is one of the must see places during our trip. We arrived at Etosha’s Anderson Gate quite late in the afternoon and rather than pay the entrance fee for just a couple of hours of game viewing, we decided to camp about 50 kilometers outside the park at a private campground. We got up bright and early the next morning and were on our way to Etosha before sunrise. We arrived at the gate about 45 minutes before the gate was due to open. I got out to stretch my legs and heard the grunt, grunt call of a lion. Never fails to make the hair on the back of my neck stand up, it must be a primeval thing, I don’t know. Now the excitement really kicked in. Lions just the other side of the fence. Oh Boy!

Posted by NextMillionMiles at 2:52 PM No comments: