Cape Town to the Namibia border

As John has requested a close-up photo of the XP I thought how better to start this update than with a John photo. As you can see we fly the American Eagle each time we raise the camper! Lots of looks but no comments yet. Actually it was a test as we wanted to add murals on the sides of the camper and we weren't sure if lowering and raising the camper would rub the murals off so we bought this cheap sticker and after hundreds of lowering and raising it is still there. Never got around to doing the murals though!

After leaving we then spent a couple of days at Yzerfontien where the beautiful white sand beach stretches for 16 miles. Great for walking and enjoying the cool ocean breeze. Our camping neighbors were cattle and wheat farmers from nearby Malmesbury and with typical South African hospitality, they gave us samples of their cooking, so we got to taste fried Snoek, which is a very large fish caught in the ocean during the winter months. They had frozen and kept it especially for their holiday week at Yzerfontien. Fresh matured beef from the farm and of course boerewors (farmer’s sausage) which was delicious.
After Yzerfontien we visited the which is a small park that surrounds Langebaan lagoon, a turquoise large lagoon which is a known for its flamingos.

Our campsite for the night was at Paternoster’s Columbine Nature Reserve which is a fabulous park right on the . The road to our site was sandy and a little rough but the destination was well worth it. We were all alone and right on the water’s edge where we enjoyed the sun setting over the ocean. Memories are made from such places.

The next day we drove the very rough road to  and then our first dirt road that was a toll road! Yep, dirt roads can be toll roads.

From  we went inland to Clanwilliam and the Cedarberg mountains.
We then had the long drive to Springbok and it was time for laundry and grocery shopping.

We then took the N14 East to see the   and make our way to the . The N14 was an exceptional good road for being so remote and relatively little traffic and then we found out why; BMW has sponsored the road and helps pay for its upkeep as they use the road in the heat of the summer to do their high-speed heat testing. While we were at Augrabies there must have been 15 or 16 brand new BMW’s of all shape and sizes which they had shipped over to do their testing with. Boy do the Germans know how to party?

Next was the Mandatory stop in the busy town of  to stock up before heading to Kgalagadi.
Most if not all parking lots for shopping centers have parking marshals that guide you into and out of your parking space and watch your car while you are shopping. It is customary to give them a small tip of around .50 US cents or so. Well, while we were being guided into our parking spot in the Upington supermarket’s parking lot, there was a sudden bang and our back left just sunk down. Annie thought we had hit something real sharp and had blown a tire, but on further inspection the ground under the wheel had given way as it was over some sort of drain. The hole was so large that the entire tire was sunk up to the axle. I engaged 4 wheel drive low and the locking diff clicked in and out we came. It was quite shocking to see the size of the hole. And the adventure continues. Yes, we still tipped the parking guy, much to his surprise.

We had broken the key to the door of the camper and were using the spare key but knew we needed to replace the key as soon as possible. So one of our chores in Upington was to find a locksmith and see if we could get a new key. The Upington locksmith studied our key for a minute or two, shook his head and said “Nope, we don’t have this key in , but I can make you one if you like!” He then went out back and returned with what he said was an old Nissan ignition key. Filed it down to approximately our key size and then duplicated it on his key machine. We then went back to the camper and did a test fit and when it didn’t work, back we went for some more filing. We did this a couple of times and then finally the lock turned! He brushed the key off with his wire brush, oiled the lock and with a huge smile gave me the new key. When I asked how much, he just smiled and said "Welcome to my country". Typical South African hospitality and kindness. Thank you Mr. Locksmith in Upington!
We had a great campsite under a huge tree but boy it was noisy that night. Saturday night in the big town.


The Lonely Planet Guide Book had pointed out that the last 60 kilometers to the Kgalagadi was on a very bad dirt road and that many of their readers had broken their cars along that route, with that in mind we left very early the next morning so that we could take it really slow along the bad road and not break our truck. Well surprise, surprise, since the last update to the Lonely Planet guide they have tarred the road and so we had a very easy ride all the way to the park. The last 40 kilometers or so you travel through the San Peoples land and many of them have small huts next to the road where they sell their handicrafts.

We had made the long trip to the Kgalagadi as it is one of the very few places where you can see the Black Mane Kalahari Lion. It is also famous for its beautiful red sand dunes. Well, I guess we should have checked the guide books a little more closely as we arrived at the end of the rainy season so the grass was knee to waist high and there was tons of water everywhere. That meant the dunes were covered in grass and the animals didn’t have to be restricted to the few water holes as there was plenty of water. So the end result was although we heard the lions calling at night we didn’t see any and of course all the dunes were as green as grass. Even though we were there at the wrong time of the year we had a great time, we especially enjoyed camping at Rooiputs which is a wild campground on the  side of the park. Wild means that there are no fences between you and the animals, which is way too much fun. Although this is where we heard the lions we didn’t get see them, but we were lucky enough to see a rare African Wild Cat walk through our campsite and we were visited by a couple of male Ostriches. We now need to return to the Kgalagadi in the dry season! 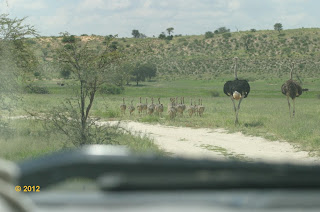 After the Kgalagadi we went back West to the small seaside town of  and then North to   and the  mouth where many diamond mines are located. Both Port Nolloth and   were cold and fogged in so off we went to Vioolsdrif and our last night in  before crossing into .

Posted by NextMillionMiles at 4:36 AM